Today Pastor Choi talks about two types of wisdom: wisdom of the world and wisdom of God.  These two clash in our lives and vie for our attention and loyalty.  Which one would you choose?  You cannot have the both.  Listen to his sermon below.

Using Genesis 3:1-7, Pastor Choi expounds on the nature of temptation and considers ways to ward off temptations in life.  The tempter: he is a deceiver; his motive is never for us, rather for his own gain; he is also a liar.

The tempted (the one who is tempted): beware of the attack that always comes upon the weakest link in your life.

Ways to ward off temptations: 1. The fear of the Lord 2. God’s Word in heart  3. Knowing your boundaries  4. Learn to be content.

Today we celebrated Sunday School Sunday.  All the Sunday School children and teachers participated in the worship services.  Pauline McShea the teacher preached a message on how we started our faith journey and where we are going.

This year the saints at Manahawkin are participating in a Prayer Challenge using a prayer journal.  During the 40 days, each one records specific prayer requests in the journal and keeps track of the prayers: the date started, what the prayer is about, date answered and how it was answered.  Want to participate?  Click here to download the form of prayer journal and start praying.   May the Lord bless you in your daily prayers!

Each month we offer a new member class entitled “Methodism 101” on the third Sunday of the month at 9:45 a.m. (see church calendar for any changes due to holidays).

This class is an overview of the origins of The United Methodist Church, an introduction to our local church and a general discussion time.

If interested in attending simply stop in.  All are welcome. 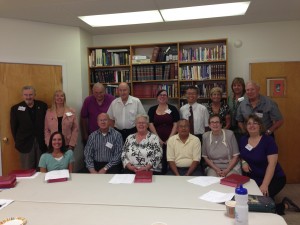 Sunday school students of the Manahawkin United Methodist Church help fight the spread of Meningitis in Africa.  Meningitis is an infection of the meninges, the thin lining that surrounds the brain and spinal cord.  Though rarely seen here in the United States, Meningitis is ravaging the child population in sub-Saharan Africa.  Each year thousands of children die from this disease and approximately 10 to 20 percent of survivors are left with permanent aftereffects such as mental retardation, deafness, epilepsy, or other neurological disorders.

The World Health Organization in partnership with PATH created the Meningitis Vaccine Project (MVP).  The mission of the MVP is to eliminate meningitis as a public health problem in sub-Saharan Africa through the development, testing, introduction, and widespread use of conjugate meningococcal vaccines.  From this partnership MenAfriVac™ was created, a vaccine to be delivered to the children in Africa.  The cost of each vaccine is around fifty cents.  It is projected that MenAfriVac™,  in sub-Saharan Africa use could prevent more than 1 million new cases of Meningitis.

Motivated by the prospects of saving lives, the students committed to try and raise $200 to donate to MVP.  Penny by penny students added to the collection.  Some students performed extra chores to gather funds, others created and sold artwork for their donation and some emptied their piggy banks.  Within three months the students raised $498, well over doubling their goal!  This donation provided just under 1000 vaccines.

For more information on MVP and how you can donate go to www.meningvax.org.

For those interested in receiving prayer from our Prayer Group please fill out our online form.

Prayer requests can be submitted during Sunday Worship as well.  Prayer Request cards are located on the back of each  pew and collected by the Ushers.